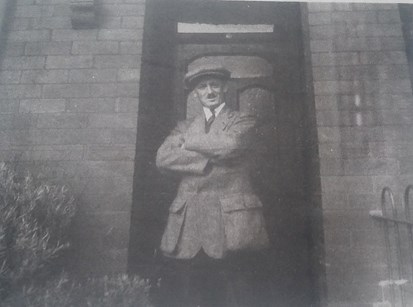 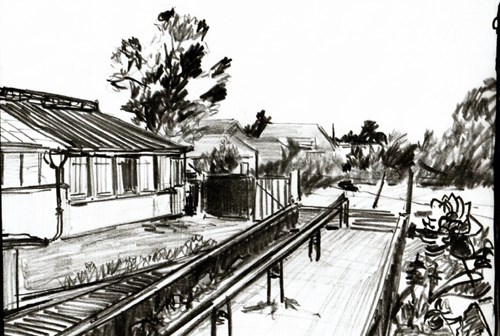 Sydney Pugh (pictured first) is the man who started it all. He came to Cardiff from Hereford in the late teens/early 20’s having previously worked as Gardener for the Hereford Estates at Croft Castle in Leominster as did all his brothers and sisters.

Sydney Pugh moved to Wenallt Road in Rhiwbina and established what was known as Wenallt Nurseries (pictured second) which wholesaled fruit and veg from the nursery gate as well as milk and eggs which he locally sourced. These activities changed little for a long while.

Colin Pugh, his son (pictured third) then joined the business straight from agricultural college having gained an RHS certificate. Colin noticed gradual improvement as people’s fortunes improved after the war and so decided to expand Wenallt Nurseries into running a fruit and veg shop first at Wenallt Road and then later Plas y Delyn in Whitchurch as well.

Faced with the competition from new breed of shops called supermarkets, in the mid to late 60’s, Colin decided to sell the Wenallt nurseries business for housing and subsequently moved to Morganstown, Radyr for a fresh start. 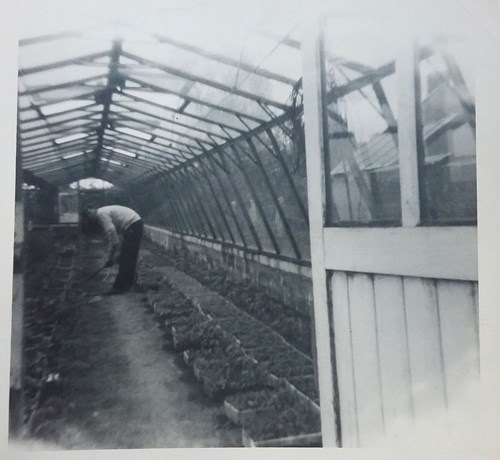 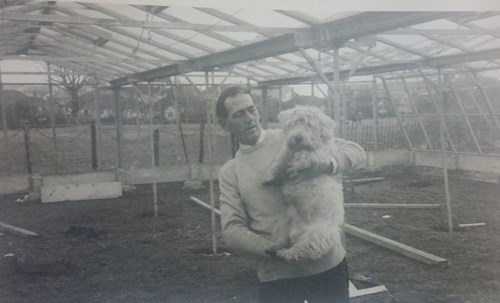 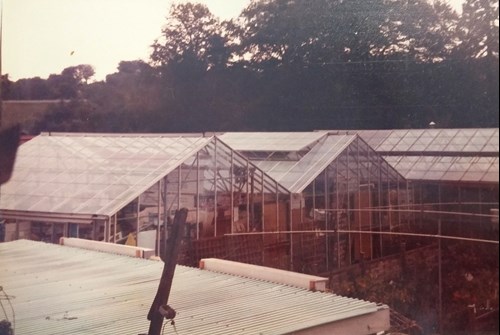 After selling the business on Wenallt Road, Colin continued and established an operation of selling plants in Morganstown, Radyr. The Site initially operated off a one acre land which he developed initially along the market garden route which dealt in wholesale, retail and pottery. (pictured first and second)

During the early to mid seventies, the traditional nurseries morphed into a recognisable garden centre (pictured third) – particularly beginning to sell plants in containers. Colin continued to develop it as a place to buy shop products, shrubs, bedding plants, hanging baskets, compost and fertilisers.

Towards end of 70’s, crowds started to visit what was then called Ty Nant Nurseries in their hundreds and the business was talked about by locals in Radyr and Castle View Estate.

At this time, the business occupied just around one acre. There were fields around it and car parking space for only two cars. The business closed for lunch and on Friday's to enable Colin to do the deliveries and paperwork.

During the 70’s, Colin's wife, Winnie Pugh, got involved and her work was particularly important in as much she was able to help with the buying and administration. It was particularly poignant as she gave up her career as a theatre sister in the Heath Hospital to join the business.

With the business growing and in full swing, it was time to bring in the youngsters! Colin and Winnie's two son's Graham and Ian joined the business. Things that they changed straight away was beginning to open for lunch and implementing lunch breaks, as well as being open 7 days a week including Sundays.

They also set about organising the administration of what, albeit a small business at the time, was definitely a thriving one. The links were developed with Radyr school which started a succession of talented young people working in their formative years in the garden centre. With the stability of experience and their desire to expand, supported by the rest of the family, they set about the change.

In 1981 they bought a strip of land and increased the size of the garden centre, adding new raised beds and more stock.

In 1982 they bought the adjacent slab/patio business and set about establishing a garden building show site. All the time they were embracing the new trends such as new varieties of plants, shrubs, colour labels and point of sale.

Also, the area on the adjacent field was gravelled over and for the first time they had a car park. At this time, they purchased mechanical handling equipment to offload slabs, concrete products, sheds and compost with a forklift.

During these early years, turnover soon started to double every three years.

The next milestone, towards the mid-80’s, was investing in surfacing the car park. This heralded a massive increase in business.

In 1985, they acquired a two acre place from their landlord. We effectively bought the land occupied now by the garden centre and decided to change the entrance.

The necessary landscaping of the entrance meant for the first time the garden centre really stood out from the road. Interestingly, this landscaping occurred outside our property. We were duly asked to dismantle it by the council. At this time, the Cardiff in Bloom Awards were being launched. We entered it for the best commercial site. It subsequently won the award and has remained in one form or another to this day.

The garden centre began taking shape into a modern day garden centre with the retail element in full swing! During this period, we became the first garden centre in South Wales to attempt TV advertising. This really drove more and more customers to the site.

Also, during this time, we had some exotic staff members namely Percy the Parrott and Charlie the Miner Bird. Both of which were excellent mimics and delighted customers of that era in the house plant area. Their friends also on site included, Purdy the Cat in charge of rodents and Heidi the Alsatian for guarding purposes.

During the expansion, Colin was adamant that we retained growing at the heart of the business.

As we displayed the space at Radyr with more retail, we bought a site in Caerphilly and built glass houses for nurseries to retain a space to grow produce ourselves such as tomato plants, bedding, veg, hanging baskets. In fact, we always have done. We still use these nurseries to this day as we keep gardening and home growing at the heart of our business.

In the Late 90’s we set up our Wenvoe project. The Wenvoe project was based on developing a garden centre, their landscaping business and an internet business in one go. We set about inviting a new investor in the project, a long term friend and successful business man, Carl Hitchings. As well as investing, he also bought a wealth of I.T experience that was needed.

We built gardens to represent different lifestyles and people would visit the gardens and either come into the shop or visit the website to purchase their products. This project was enthusiastically welcomed by the trade as a new innovation. The truth of the matter in the late 90’s/Early 2000’s is that customers were just not ready for internet shopping. It subsequently reverted to a garden centre and invited concessions on. Thankfully the business is thriving in the Vale of Glamorgan under the now Pugh’s banner.

1995 – Maidenhead Aquatics came on board as our first concession store and made it a way forward to look at the modern departmental garden centre by breaking the mould of the traditional concession. Developing this model, we substituted departments with stand-alone concessions and we were the first garden centre to trial this successfully, nationally.

In 2006, our Wenvoe shop rented space to Country Wide plc and we had further concessions for craft and garden furniture.

In 2008 we bought the middle bit of land that separated the site and built our Farm Shop development which also included Cotton Traders and Heatforce as we continued our unique garden village concept with the original garden centre being the dominant business.

In 2011 Maidenhead Aquatics had a new shop built. The landscaping centre moved to Wenvoe and we had two new tenants in Radyr – Mountain Warehouse and Robinson's.

With the increase of visitors, our existing coffee shop got over-run so we then took the opportunity to buy Morganstown Rugby Club from the Council and developed it into The Watering Can Coffee Shop (pictured first). The coffee shop has become an extremely popular social meeting place as part of our garden village experience which can easily become a day out. It is also an ideal place to take a time out from that cycling trip or hike along the Taff Trail.

In September 2015 we developed what was the old coffee shop into a brand new entrance adorning our village. You are greeted with a friendly face at our reception and information area, along with an array of hundreds of top of the range gift products and well-known brands to suit all occasions and ages. As part of this development we were also able to build offices capable of servicing the business sitting on top.(pictured second)

Helen Pugh, Graham's wife (pictured third on right) had always been involved in the background and in the shop but when their kids grew up, she organised the original coffee shop and oversaw and designed the new coffee shop. Her involvement, like Winnie Pugh's previously, signified a shift change in our standards of catering, gifts, Food Hall and retailing which have all been critically acclaimed by the trade press.

Making the most of Christmas... 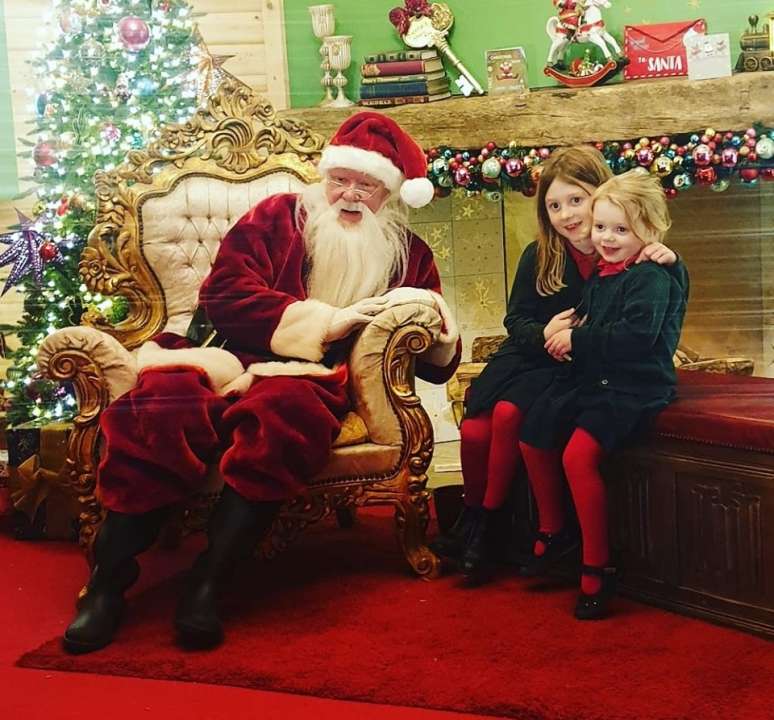 Starting in 2015, Barry John, who works on our shrub area wanted to use his exceptional graphic design skills to create a magical Christmas Grotto Experience for our younger customers and their families.

With the St. Mellons rotary initially providing Father Christmas’s and supporting staff, we decided to give it a go.

With Barry’s skills and a wider-team involvement, our Christmas Experience has now developed and grown into both a locally and nationally recognised event. We now see in excess of 16,000 visitors to our experience through December, selling out all tickets. We are exceptionally proud of our experience which encompasses a whole magical 30 minutes, including story-telling, interaction, activities plus of course a visit to the main man himself. Our experience has also facilitated a way for us to raise money for some incredible charities. In 2017 we raised £12,000 for Ty Hafan, we then matched this to raise £12,000 for Bobath the following year and in 2019 we raised a phenomenal £13,377 for Cancer Research Wales. This is done through ticket sales and we're incredible grateful to all of our customers' support for making these amounts possible. 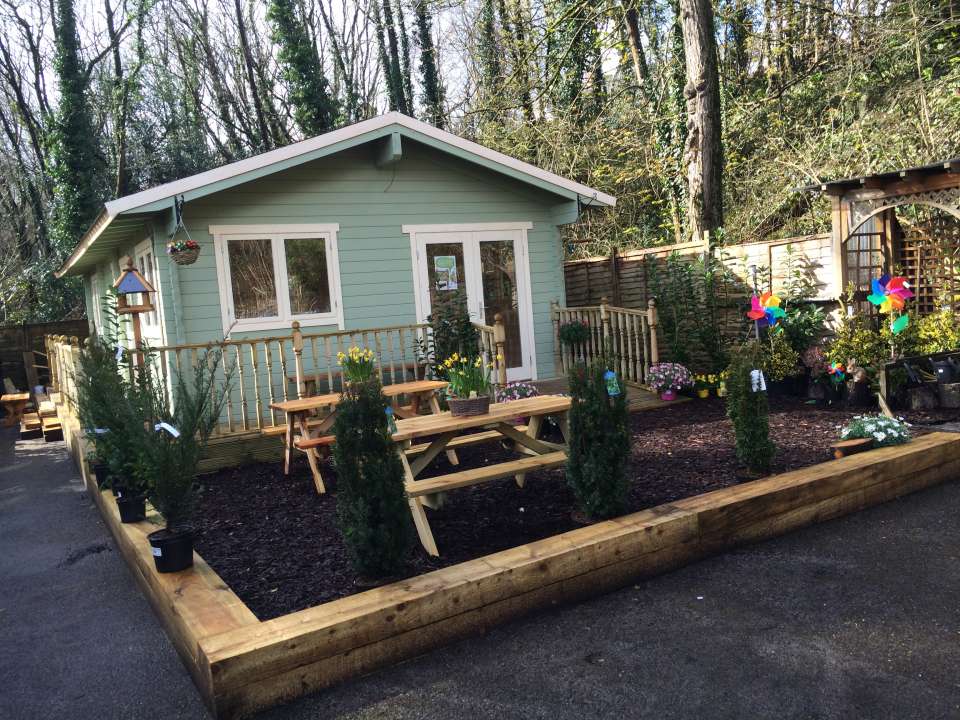 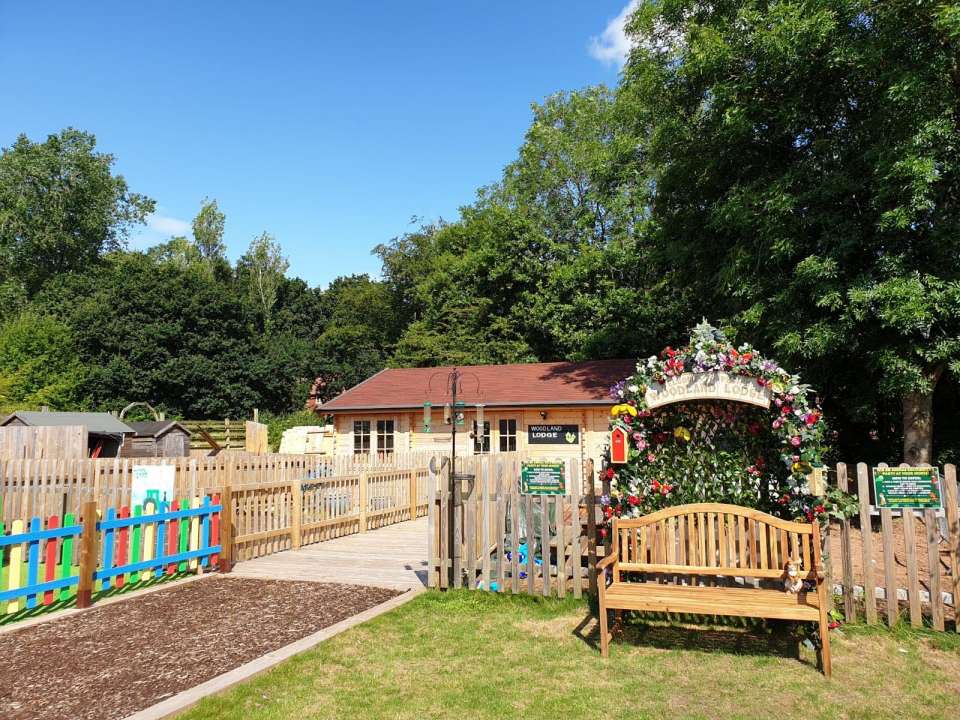 As part of our efforts to engage with the local community and offer our gardening expertise through experiences, we introduced our newest structural addition to the village in 2016; Pugh’s Woodland Lodge - A robust log cabin with an envious outside space to facilitate a variety of workshops for all groups of people and all ages, nestled in the surrounding woodland of Pugh’s Garden Village Radyr.

Headed up by our Woodland Lodge rangers, Catherine & Elaine, we offer an array of workshops for Adults, Children, Toddlers and Schools all year round!

This was later added to in 2018 when we opened up our second Woodland Lodge in Pugh's Garden Centre in Wenvoe to allow us to offer similar experience to groups in the Vale of Glamorgan.

Where we are today... 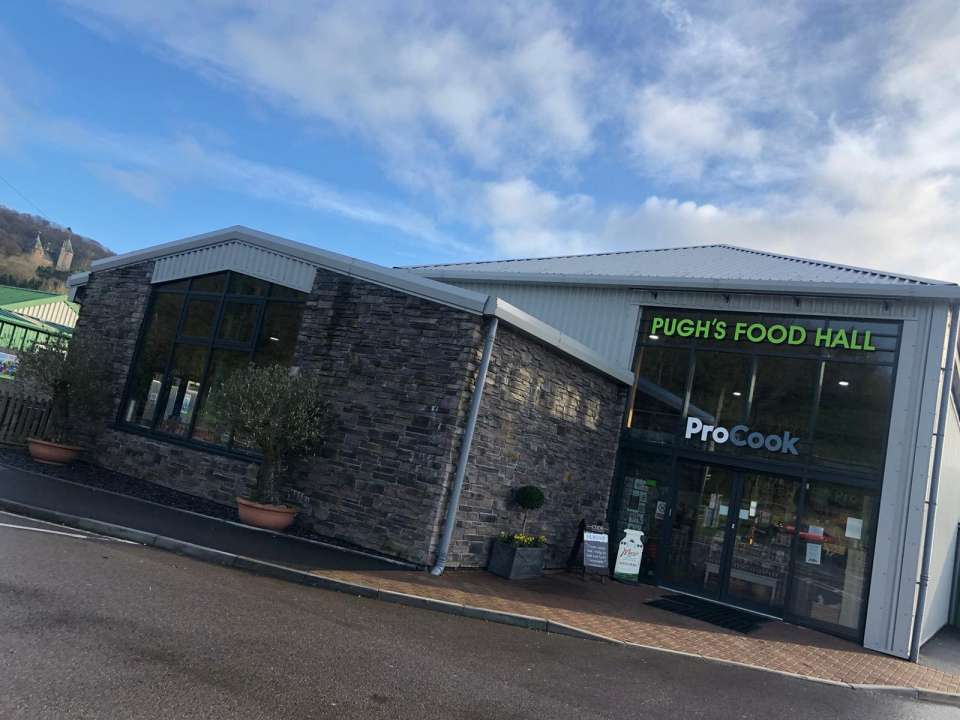 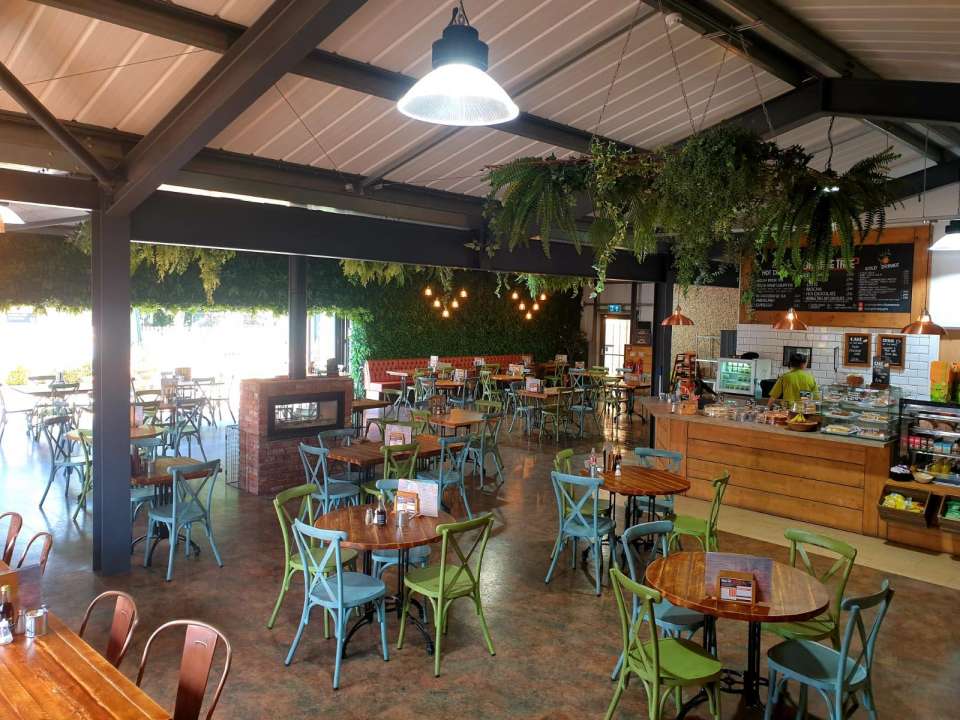 We're constantly growing and in 2018 alone we opened up a brand new Restaurant in Wenvoe; The Orange Tree (pictured third) plus Pugh's Food Hall and The Walnut Tree Express Coffee Bar in Radyr (pictured second)!

We believe our strength lies in the fact we are very much a family run business (with three generations now involved) and the depth of knowledge our staff can offer our family of loyal customers.